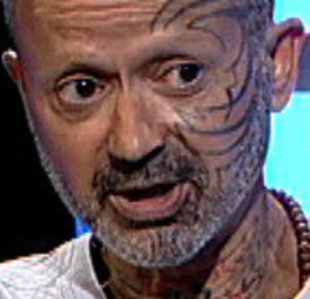 Kim Tattoo Every Monday at 7.10 pm, El Punt Avui TV's English Hour airs the interview series Going Native. This time Neil talks to Kim Tattoo from Valls, a veteran who set up the first legal tattoo studio in Spain.
Going native - Neil Stokes
When did you start doing tattoos?
I started in 1989, 27 years ago, and at that time it was not normal to have tattoos in Spain.
I can't imagine there were many tattoo artists in Spain at the time.
No. My tattoo shop was the first legal shop. There were only three or four tattooists in Spain.
What people did have tattoos before you came along? I suppose there weren't many?
No,not many. They were old school people. It is very different now. I had contact with bikers, people in the military, people from the United States, London, northern Europe, but for the Spanish it was new at that time.
How long did it take for people to start asking for tattoos?
It was very difficult in the beginning. I remember that when I opened my first shop people said: “What are you doing? You're crazy!” Yes, it's possible that I was crazy, but almost 30 years later you see can see that it was a matter of time. I had a vision of the future, but I think that I did this for me, because it was my job, my life, my future.
Is it also an artistic pursuit for you?
Yes, but also it might be because when I was younger I wanted to be a doctor, a surgeon. And I think that because of that I have changed the world of tattoos. I have added sanitary and clinical elements, like clinical study that radically changed tattooing around the world. I like art, too, my grandfather was an artist and when I was younger I would watch him painting and I liked that. So with tattooing I can more or less do both things together. I remember when I did my first tattoo, I thought “Wow! I want to do this all my life!”
Where did you have your first experiences? How did you train and learn how to be a tattoo artist?
At that time it was really difficult. I tattooed my whole body because there were no tattooing schools in Europe in that time. There were only schools in Argentina, I think, in the United States, in Japan, where it is very traditional, but I had to practice on myself, you know, trying out different lines, colours... I'm now a living experiment. But one day I thought that if I wanted to do this seriously, I needed to open the first tattooing school. And so that's what I did.
When was that?
It was in 1994. It was the first legal school, and a lot of people came from all over the world, from Chicago, Argentina, Portugal, Brazil, Italy, Spain... I'm happy with my progression in tattooing. I wanted to do more things in my job, I wanted to make people see tattoos with another point of view, and I think that I achieved that. I changed the studio, the machines, all the outfits, I innovated. But after some years you become tired of this so I came back to the beginning, I decided to return to the origin, more quietly, because in tattooing I like above all the contact with people.
I wanted to ask you about that because it is interesting what you said about doctors. It seems to me there has to be a really intimate relationship between the tattooist and the person you are tattooing. Is there some type of special relationship?
In my opinion, there are some jobs where the person must come first, because you can do something for another person who is just like you. We are all human. You have something special, I have something special, everybody has something unique and I have to find it, because a tattoo is for the rest of your life. And that is my work. It's a kind of connection. It is a huge satisfaction.
Why do you think people want tattoos? What is the motivation?
It has changed in 10 or even 30 years. In the past people would come and say: “I want this picture” then when I asked why that picture, they would say: “Because I have the spirit of a lion” or they wanted an eagle because they wanted to be free. But now it is different. Now it is just for how it looks. It's just aesthetic. Well, sometimes people just think that if their friends have one they want a tattoo too. Years ago you could do art with tattoos, but now you can do everything. Absolutely everything. You can make a point or you can draw Dalí. Obviously, you have to know the techniques properly and have the experience, because at the beginning you just know how to do a few things. But after five, six, seven years you learn more about how to tattoo. When you have been tattooing for 10, 15 or even 20 years, you can tattoo amazing things, like in music, painting, sculpture and all those kinds of artistic jobs. However, I don't consider myself an artist; for me an artist is another thing. I consider myself an artisan, a craftsman.
Leaving his mark Leaving his mark Leaving his mark Leaving his mark Leaving his mark E-mail
Leave a comment
Sign in. Sign in if you are already a verified reader. I want to become verified reader. To leave comments on the website you must be a verified reader.
Note: To leave comments on the website you must be a verified reader and accept the conditions of use.