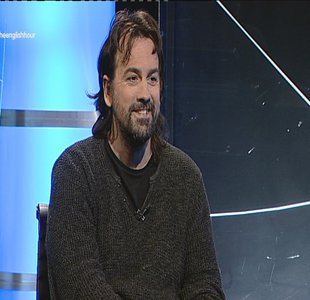 Isaki Lacuesta Each Wednesday evening El Punt Avui Televisió airs the series of interviews, Catalan Connections. Marcela Topor talked to the filmmaker Isaki Lacuesta about his latest film, La propera pell.
catalan connections - marcela topor
Your film, La propera pell (The Next Skin), won six awards at the Malaga film festival and three Gaudí awards for best film in Catalan, best script and best actress (Emma Suárez).
It is a film co-directed with Isa Campo; we've been working together for many years –she used to write the scripts for my previous films– but this was the first time we co-directed and it's been a great experience – two minds have more ideas than one.
This film is more accessible than your previous films, it's not so experimental.
It's a very classical film, I wanted to make a film like the classics I used to watch when I was a teenager. Probably if somebody asked me when I was 15 what kind of movie I would like to make in the future, I would have answered, a movie like this one. In fact, is not so different from my previous work; I made Los Condenados in 2009, which was fiction with mystery elements. I think it is like Los Condenados but with a more empathetic approach. Probably my approach to emotions has made critics say it is more classical.
Tell me about the plot.
It is the story of a mother whose son disappears when he's nine, and eight years later she is told they found him in a centre in France. The mother recognises him and takes him back to the village. It is this moment when the story really begins, as they all try to discover if he really is who he claims to be, if he is her son or an impostor. It is a film about identity, but also about love, about how we can choose who we want to be, about the possibility of becoming somebody new; we can change our past, present, we can become new people. Identity is a theme I've explored a lot in my films, but not as something conscious,
Dealing with identity issues is more difficult in a small community like the remote mountain village.
Yes, everybody knows your past even better than you, especially in this case. Leo (Gabriel Àlex Monner) has amnesia and doesn't remember his past, or he's pretending he doesn't. Sartre said: “Hell are other people” and here, your past, your memories, are the others, they own your memories.
It stars Emma Súarez and Sergi López, among others.
Yes, a great cast. I began working on this film in 2004-2005, and proposed the part of the mother to Emma Súarez; we wrote the script for her. Because she is bright even in the darkest moments, she has a lot of light even in the saddest scenes, and as an audience you can always understand what she is thinking. I believe that in cinema it is important to transmit emotions, feelings and thoughts, all the things that are supposed to be invisible, and Emma can do that in a very subtle way, with very few gestures, she never overacts.
What about the main character of Leo (Gabriel)?
At the beginning we were worried about the character of the boy; we needed someone able to play at different levels. One of our producers was involved in Pulseres vermelles, the TV series, and he told us about Àlex, but he was then only 14, too young for this part. But this has been a slow process and we finally met Àlex three years ago and we knew he was great to play Leo.
How would you describe the style of the film?
I like to describe it as a mixture of drama and thriller. But above all, for me, it is a portrait. I like the idea of cinema as a portrait of people, this is a common feature in all my films.
In terms of inspiration?
When I was a teenager, my favourite filmmaker was Hitchcock, I love the films he made in the '40s, such as Spellbound or The Shadow of Doubt, when he made more realistic films. They are not very sophisticated in terms of mise en scène, the mise en scène wasn't more important than the characters, and I like that transparency. La Propera pell has this realistic approach, but of course what we call now realism in cinema has changed a lot. Realism is always a construction, it is a pact with the audience of your time.
The film is shot in French, Spanish and Catalan.
Yes, it is a Catalan, French and Swiss co-production. We released the film in France, and in Switzerland as well, last month. It is set in a small village in the Pyrenees on the French border and they speak three languages there. It was important for us to use language like in real life. We also used languages to show Leo's emotional transformations throughout the film. Àlex learnt French specially for this part and in France the screening was really successful, in part for his accent.
Any anecdotes about the shooting?
A film is never easy but this was the easiest shooting we've ever done. I had shot before in the jungle, a desert, and to be able to work here with friends, was great. We depended a lot on the weather; there was no snow, and while waiting for snow we shot the inside scenes. Then we finally had snow during the last week of the shooting.
Becoming somebody new Becoming somebody new Becoming somebody new Becoming somebody new Becoming somebody new E-mail
Leave a comment
Sign in. Sign in if you are already a verified reader. I want to become verified reader. To leave comments on the website you must be a verified reader.
Note: To leave comments on the website you must be a verified reader and accept the conditions of use.