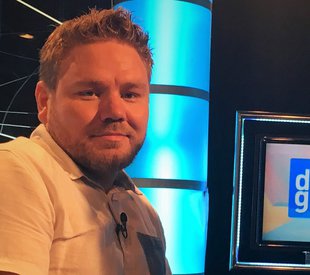 For this month’s interview, she had a chat with the Finnish chef and food stylist, Jani Paasikoski.
small talk - Nicole millar
Where are you from?
I’m from Helsinki in Finland but I moved to Malaga when I was five with my parents and my brother. We lived there for five years, and after that we went back to Finland with my mother and my brother. However, I used to spend all my holidays there with my family and I was always thinking of living there after I had finished studying and the obligatory military service in Finland.
When you finished university you came back to Malaga in 2001. What did you study at university?
I studied in a restaurant school for three years. After I graduated, I did the military service and then I went to Malaga for a two-week holiday with my girlfriend, to see if she would like living here and in about one month we were settled.
How did you get into food? Was food part of your life from early on?
Food has always been something important in my family: for all celebrations we cook at home; we never go to restaurants or use catering services. When I was 16 I was studying economics but I immediately realised that I didn’t like it at all. Then I started working in a local supermarket in Finland and my boss was a chef; he introduced me to this world by telling me stories about what is it like to be a chef and all sorts of things related. Shortly after I knew that I wanted to try it. Since then, all my life has been all about cooking.
You said that you went working from restaurant to restaurant along the coast in Malaga.
Yes, I’d worked for four years when I decided that it was the moment for a change. At that point I thought that I had already seen and worked in all the important restaurants in Malaga so I decided to go and find new ones. I got an offer from a restaurant in Jávea, Alicante, so we moved there. I worked there during the summer but it didn’t work, so I decided to try and look for a job in Barcelona.
Why Barcelona and not Madrid or any other big city?
I didn’t really know much about Barcelona, I only knew that it had a lot of good restaurants. I sent my CV to all the restaurants that had Michelin stars and not long after I got hired. Everything happened pretty fast, they had a rush because it was Christmas time and they needed a lot of people. As long as it was a Michelin starred restaurant, I had a lot of pressure and work. I had never experienced that before.
After two years of working there, you were the chef and director of a restaurant called Cercle d’Amics, right?
That was the last restaurant I worked in. It was the most personal project that I’d done. It was my restaurant so I could manage the team the way I wanted. I also started to create new ideas for food and dishes. After all those years getting knowledge it was time to put it into practice.
Now you have your own business, don’t you?
Yes, after three years working there I decided to start my own business. Now I’m a home economist, mostly known as a food stylist. I make food look good and delicious for adverts and magazines.
How do you prepare the food to look great?
There are many tricks in order to make food look delicious but as I’m a chef, I like to cook the food. Nevertheless, there are some kinds of food that need to be faked, like ice cream: you can’t have an ice cream out for a long period of time because it melts, so we have to use other ingredients to make it look good. Also there are a lot of details that you have to be aware of; sometimes you have to paint the top of some dishes with oil or move a grain of rice. I don’t just make the food, I have to be there to reorganise the meal when it goes down.
On your website you offer a lots of services. So what else do you do?
I have a private chef service: people can hire me to cook a meal in their home. I usually cook traditional Mediterranean dishes. What I do is I go to the market and buy fresh ingredients and then I go to their homes and cook whatever the meal is.
What is the food like in Finland?
It’s very different from the food we have here. What I like to do is experiment with different techniques and food from here and there in order to create new dishes.
Do you ever go back to Finland?
I go there when I have work to do or maybe if there’s a course that I want to attend.
What projects do you have for the future?
I’d like to start a gastronomy travel agency in Catalonia to take people to visit important gastronomic places and fairs. I’m also planning on exporting products from here to Finland and importing from there so we can learn each other’s culture better.
Cooking with style Cooking with style Cooking with style Cooking with style Cooking with style E-mail
Leave a comment
Sign in. Sign in if you are already a verified reader. I want to become verified reader. To leave comments on the website you must be a verified reader.
Note: To leave comments on the website you must be a verified reader and accept the conditions of use.