Cadí-Moixeró is a mountain barrier formed by the Serra del Cadí range on the west side and the Serra del Moixeró on the east. They are connected by the Tancalaporta pass and extend for more than 30 km parallel to the Pyrenees, a territory of great ecological and geological interest. Mountains with steep cliffs, wooded hills, alpine meadows, screes, rivers and valleys make this a diverse place.

The importance of protecting it comes from afar, and in 1932 the Republican Catalan government already considered protecting it. The massifs of Pedraforca, which has special protection as a natural place of national interest, La Tosa and Puigllançada are all different areas, each with its own attractions.

With such a large area – more than 40,000 hectares – the possibilities for visiting the park are many and there are itineraries and routes for all tastes. Those of the Orris and Cap del Ras viewpoints, for example, are adapted for people with mobility problems, and also have other accessible places and facilities, such as the interpretation centres of Bagà and Bellver de Cerdanya, the Casa dels Parcs dels Pirineus in La Seu d’Urgell and the Flora Centre in Tuixen.

For the better prepared, there are geological itineraries that allow visitors to trace the history of the formation of these mountain ranges, which occurred when sheets of rock moved south when the Pyrenees appeared.

Another option is traditional paths, especially cattle paths, as the park is home to areas of high mountain pasture and still retains walls, cobblestones and other infrastructure used for moving livestock.

There are also relatively simple nature itineraries, signposted with informative panels on the different species that can be found there. The richness of the vegetation is undeniable, about 1,400 species and subspecies of plants with flowers and ferns are known, which represents around a third of the flora of Catalonia. There is also a wide variety of fungi and lichens, about 130 species of birds – some of which are typical of the Mediterranean and others of the mountains and forest – and about 60 mammals, including chamois, deer and roe deer. 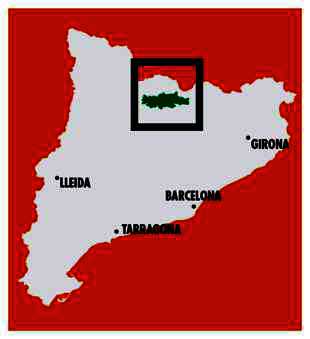 This plant, also known as alpine delphinium, is native to the eastern Pyrenees. Its status is monitored within the framework of the FloraCat cross-border project, which monitors Pyrenean flora in Catalonia and the region of Northern Catalonia and Andorra. Of this species, which grows in very stony screes and meadows, there are no more than a dozen populations and over half of the plants grow in this park.

“The top of the Torreta de Cadí hill is dominated by boulders. A large pile of stones forming a rounded wall rises to the top. The view is superb, with no obstacles anywhere around. The panorama is excellent, comparable to that of the other peaks of the mountain range. The grandiose effect of deep channels surrounding the hill is astonishing and terrifying.”

The value of artisan and craft products

Apart from the conventional excursions and nature activities, this park also offers a wide range of unique activities that can be carried out in the different villages that surround it and that allow the visitor to discover and learn about local products.

From working as a shepherd for a day to making musical instruments with natural materials, to making cheese, jam, allioli and beer workshops – there is a full range of possibilities available.

Activities are also organised to learn about medicinal plants and to collect fir turpentine, as was done in the past. And there are several farms and livestock farmers who open their doors to see, for example, how they take care of their orchards or how a a sustainable high mountain ranch farm works.