I promise to faithfully fulfill the obligations of the position of President of the Generalitat, in accordance with the popular will of the citizens of Catalonia represented in our Parliament.” With this oath was the 132nd Catalan president, Pere Aragonès, sworn into office on May 24. In his first speech, Aragonès outlined the four “urgent” priorities of the new republican Catalan government, saying it must be “social, green, feminist and democratic”. The work to try to achieve those aims began the next day, when Aragonès announced his new executive.

The swearing in ceremony that took place in the evening was a sober affair. There is no regulated protocol for these events and it is left very much to the discretion of the new president. However, it was the first time that the swearing in of a new head of government had taken place in the Tarongers courtyard in the Palau de la Generalitat, the Catalan government headquarters in Barcelona.

The new president stated his willingness to drive through major changes, and there was no shortage of symbolic elements, such as references to the historic republican presidents from the ERC party who preceded him. Yet Aragonès also said his government aimed to serve the entire country, giving thanks to the public servants who have been on the front line in the fight against the coronavirus pandemic.

In a nod to sustainability, the courtyard where the ceremony took place was covered with braided natural fibres for the occasion. The Catalan music group, Ginestà, performed the song ’Estimar- te com la terra’, while in a stanza of the national anthem performed by Magalí Sare and Manel Fortià, at the singer’s request and with the approval of the new president, the usual masculine form of the word ’reapers’, or ’segadors’ was replaced by the feminine form, ’segadores’.

In his first speech as president, Aragonés summed up the new government’s programme with which he aims to promote a profound transformation of the country “without leaving anyone behind”. He also reaffirmed the commitment, already referenced on the previous Friday when the parliament confirmed him as the new head of government, to work “to achieve amnesty [for the jailed Catalan political leaders] and make self-determination inevitable”. Aragonès called for a “just, prosperous, green, feminist, and fully free” Catalonia, and described the moment as “transcendent” due to the “very complicated” situation in all aspects of society.

“The country needs to lift its head again and begin a new phase. With all urgency. Without further ado,” he said, and he called for “clearing the way” and getting to work without fear to “overcome the bumps in the road” so that “everyone can move forward.” Aragonés evoked himself as a teenager, going into politics inspired by the ideals of social justice and national freedom. “Two struggles, which for me, are completely inseparable, and which from today I will continue to serve from the presidency,” he stressed, concluding, as he did on Friday, with: “Long live free Catalonia!”

Among the 40 guests listening to his speech were former presidents such as Artur Mas, the incumbent ministers, members of the parliament bureau, leaders of parliamentary groups – except for those from the Vox, Cs and PP parties, who chose not to attend – some of the jailed political leaders, such as the president of the pro-independence Òmnium organisation, Jordi Cuixart, the general secretary of the Junts party, Jordi Sànchez, and the president of the ERC party, Oriol Junqueras, who was back in the Palau for the first time since the events of October 2017 that led to his imprisonment.

Moments before his speech, in which he praised the work of his predecessor, Quim Torra, Aragonés had received from his predecessor the ceremonial medallion by goldsmith Jaume Mercadé, which has been awarded to new Catalan presidents by the outgoing head of government since the Republican era. There was no such presentation for Torra when he took office three years ago, as his predecessor Carles Puigdemont was by then in exile, and the medallion was left on the desk in the president’s office.

In the front row, in addition to Torra and the new parliament speaker, Laura Borràs, who read the resolution declaring Aragonés president, were his parents, the Mayor of Barcelona, Ada Colau, and the Spanish Minister of Territorial Policy and former leader of the Catalan Socialist Party, Miquel Iceta. His presence was seen as a positive gesture, as no member of the central government had come to Torra’s swearing in ceremony three years ago. At that time, the conservative PP party were in power in Madrid, and they stayed away in disapproval over the format of the event, which had been kept purposefully austere to point out the abnormal political situation, with Catalonia under direct control and the political leaders of the independence referendum imprisoned.

Pro-independence groups did not gather outside the Palau, and there were only a few curious people and about 50 pro-Palestinian protesters, although dozens of people followed the event on a screen outside the ERC party headquarters. Aragonés arrived at the Palau on foot, with his wife Janina Juli and his two-year-old daughter Claudia. Before entering, he laid a red carnation on the Stolpersteine plaque honouring victims of Nazism, and in this case Lluís Companys, the last ERC party president to take office in Catalonia, who was executed by the Franco regime in 1940 after being captured by the Nazis. The last ERC party president had been Josep Tarradellas in 1954, who at the time was still in exile in Mexico.

Inside, the new president was met by the Mosso d’Esquadra chief of police, Josep Lluís Trapero. After a formal inspection of a formation of Mossos in dress uniform, Aragonès met representatives of health, education, and Civil Protection. Before leaving the courtyard as president, he stopped for a moment in front of the busts of Companys and Republican president Francesc Macià. As the Catalan poet J.V. Foix put it: “I’m excited about the new and I’m in love with the old.” 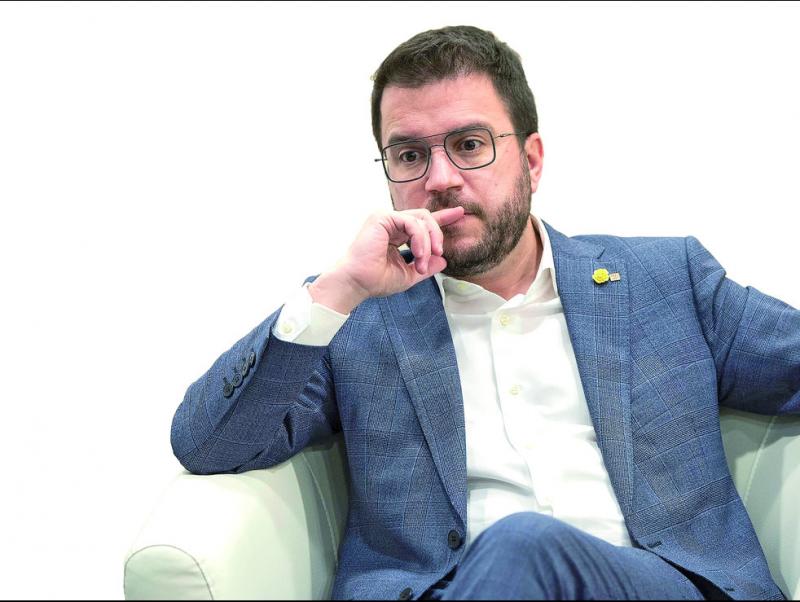