The town of Banyoles and its lake are inseparable. Yet Banyoles lake has overshadowed another of the town’s iconic features: its 33-kilometre network of irrigation canals built by Benedictine monks from the Sant Esteve monastery. Using the eight-metre difference in elevation between the lake and the town, and after building a dike near the lake to dam the water, the process of constructing the canals began. First the monks drained an area of wetland and then added more canals to irrigate crops. The result is today’s network, made up of six canals: Ca n’Hort, Teixidor, Figuera d’en Xo, Major, Xucladors and Guèmol.

Apart from bringing water closer to the population for domestic use and to water orchards and crops, over the centuries these waterways have left their mark on the architecture, trades and industry of the town. It is this legacy visitors can explore on the Ruta dels Recs, an itinerary tracing the network, which now has a new addition, the Ruta del Rec Major.

Of all the canals, the Major, documented as early as 1263, best exemplifies the value of the canals as an economic engine. The 2.2 km walk starts next to Banys Vells at the lake and follows the Rec Major canal, passing through the town centre as far as the copper forge. There are 11 stops along the way (see inset), with information panels to explain the evolution of the town through its irrigation system and water-related buildings. From the 13th century, the Rec Major canal was associated with industry, playing its part in the production of dyed fabrics, paper manufacture and milling flour. New professions were also born, including millers, blacksmiths, bakers and dyers. 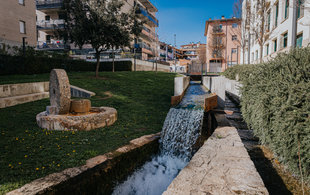 Cal Nocaire
Here there used to be a draper’s mill - a wooden smock mill built on a single-storey brick base - but only the mill stone and the waterfall remain. It is now part of the route as an area for walking, with a water park and educational activities. 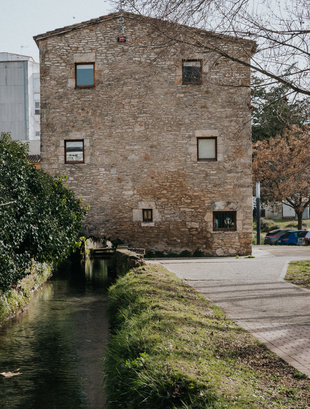 Can Quim del Rec
During the Middle Ages, eels were fished in this section using a funnel system. Later, between the 17th and 18th centuries, the area, which had only been used for orchards and crops, was chosen to build Can Quim del Rec. The three-story watermill was built over the Rec Major canal, which was covered by stone. However, the blades of the mill have not survived. 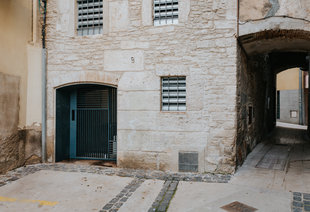 The Molí dels paraires
Behind the bars of the front door, the mill that was once worked here has since been restored and named after the guild dedicated to the wool trade. Its four-metre waterfall was first documented in the 14th century. 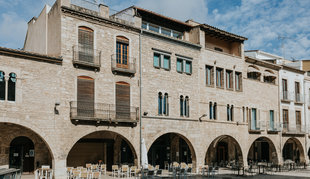 The Molí de la plaça
The main square of Banyoles is of medieval origin and stands out for its porches and vaults, which were built in the 14th century. The Rec Major canal is not visible because it is covered, but visitors do have access to Cal Moliner, the former flour mill still has its waterwheel inside. 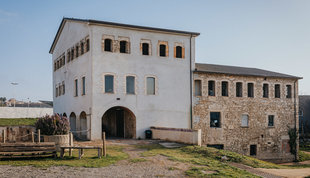 The farga d’aram and the molí paperer
The route ends in what is now the only paper mill in the Girona region where craft paper is still made. It was originally a public copper forge, built in 1685. In the 18th century, the metal business was privatised and expanded with a large outdoor pond that still exists. As the economy changed, the forge was later converted into a paper mill. 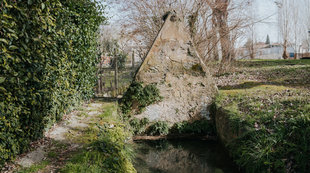 El Límit
At the start of the route is the curious triangular structure known as El Límit. The exact date of its construction is unknown but textual references from 1832 have been found. Its purpose is to prevent flooding and regulate the flow of water in the channels.

A route with 11 points of interest