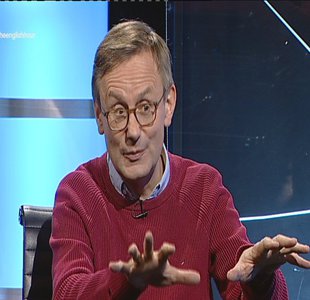 Simon Halsey Each Wednesday evening El Punt Avui Televisió airs the series of interviews, Catalan Connections. Marcela Topor talked to British conductor Simon Halsey, the director of the Orfeó Català Choir.
catalan connections - marcela topor
You are the new director of the Orfeó Català choir and artistic advisor at the Palau de la Música. How do you manage to combine this with your activities abroad?
With great difficulty and a lot of planning. We often plan two years ahead, doing an enormous jigsaw puzzle between Orfeó Català, the London Symphony Choir and the City of Birmingham Symphony Choir.
What about your work in Barcelona? It's actually a dual position.
Yes, I have two separate jobs: the job of conductor of the Orfeó Català has existed for 125 years, the length of the existence of this choir. By choir standards that's really old. There are certainly cathedral and church choirs that go all the way back to mediaeval times, but as a secular, civic, and in this case also a political choir, that's old. And I follow a succession of very distinguished gentlemen in that position. In the rehearsal room there are nine photographs, I'm number nine. Nine middle-aged men, and I really think the next one must be a woman.
What are your main aims?
My job is to bring my musical skills to this wonderful famous choir. Something really remarkable has happened over the years in Barcelona, because the choir was founded 125 years ago, and in 1908, the Palau de la Música was built for the choir, and I think it's the only concert hall in the world which is owned and managed by its choir. I think it's completely unique and speaks very clearly of the amazing position of choral singing in the political history of Catalonia. It's a very important part of what Catalonia is, in terms of its aspirations, language and culture.
What made you accept this position?
I came because they wanted someone from the outside, who had a lot of experience. There are lots of people who can conduct choirs, but I have grown a reputation for doing enormous public performances, with a thousand singers...
Like the one you did at the Lincoln Centre in New York.
Exactly, bringing communities together. The idea was to come up with a text on the rather naive question: “What makes me happy?” We brought people together from all communities in New York. It was a summer project, people gave up their holidays and free time for it, and on a day of 43 degrees and 100% humidity, we stood outside and performed it. The New York Times wrote that it was one of New York's proudest days, because it was such a statement, of doing something new and interesting together. It's those particular images and ideas that we are going to bring to the Palau de la Música now.
So you are going to do something similar in Barcelona?
The simple answer is yes. Whether it's going to be this project or we create something new, not sure yet. But we shall be creating lots of projects that will be going out from Barcelona. It is wonderful to create things we can export. We are just about to take our girls' choir to Hannover and our adult choir to London.
There is now a growing interest for choir singing.
I think at this particular time, when the world is such a fractured place, probably big statements about how important community is rings true for the whole world, but particularly for the history of singing in Catalonia. I had a a great experience working with the big orchestras in the big festivals in the world, so I'm going to bring two things to the house, with my artistic advisor's hat on: the first, is a lot of connections around the world, with conductors and orchestras, so we can make sure that the Orfeó Català gets lots of opportunities to tour abroad and give our message to the world, and I also have lots of connections that can bring new work to the house and to the city. And I would like us to be of the great creative houses of the world.
In terms of international connections?
We are most certainly going to join up with Lincoln Centre New York, with London Symphony and the Berliner Philarmonica, three of the greatest institutions in the world, and to those three add now, the Orfeó Català and Palau de la Música, to commission new exciting work, because it's terribly important that choir music is alive, that we're doing the great masters' works, but also new work all the time. We are fostering the ambitions of the remarkable people who founded the Orfeó Català.
How did your passion for choir singing start?
It runs in the family: my father is a famous composer and my mother is a singer. When I was eight, I started singing at Oxford cathedral for 13 years, eight services a day, until 21, then at university at Cambridge in the very famous King's College Choir. From the age of 10, I knew I wanted to be the person standing in front of the choir directing it. My best friend since then, Howard Goodall, wanted to be a composer. Now he is a very famous one, writing scores for the West Wend in London.
A song for the world A song for the world A song for the world A song for the world A song for the world E-mail
Leave a comment
Sign in. Sign in if you are already a verified reader. I want to become verified reader. To leave comments on the website you must be a verified reader.
Note: To leave comments on the website you must be a verified reader and accept the conditions of use.