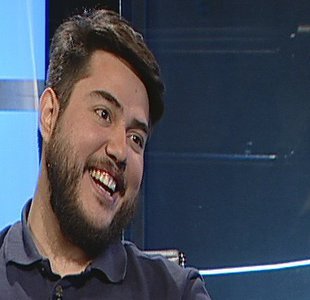 Ander Pribizchuck Every Friday evening on El Punt Avui Televisió, Nicole chats with an English-speaking expat. For this month's interview she had a conversation with Paraguayan musician, Ander Pribizchuck.
small talk - Nicole millar
Ander from Paraguay, well that is where you where born. Where is your family from?
Yes, I was born in Paraguay. My surname is a bit strange because my grandfather was born in Russia. That is where it comes from. It is misspelt, as they went to South America to escape the war and that is how they spelt their name when they arrived. Phonetically.
You have lived here for 13 years now and just an hour outside Barcelona. Your parents moved here as they thought the opportunities for you and your brother would be better.
We had a great life back in Paraguay but they still thought the opportunities here would benefit us more. And we have family here, too, so that made the decision easier.
Have you been back to Paraguay? Do you miss it?
I have been back a few times. I don't really miss the country but I miss my family there. We have a big family over there. The country is the same as here in some aspects. In a cultural sense.
So it wasn't a huge shock moving over here?
It was a shock as I had no idea that Catalonia existed. My parents told me we were going to live in Spain but actually when we got here I realised there was a lot of Catalan around, this wasn't really Spain. But I have always liked languages, and the first thing I started to do was to start listening to the radio.
And I suppose going straight into school full time. You are fully integrated.
Yes, my brother and I both did pretty well at school. I did a few separate Catalan classes to improve my Catalan and then it was fine.
Do you believe it is a better life for you, your brother and your parents over here?
I think it is different, but not necessarily better. Back in Paraguay my parents had their own business, so the change was much more dramatic for them. They now work for other people, not for themselves. But they were right, the opportunities here are way better. Not just for our education but for our music. My brother and I both started our university degrees and then dropped them so as to concentrate on our music.
Was music always in your life? Where does it come from?
I don't have that musical background in my life, but a few years ago I was looking through pictures and I found a picture of my mum when she was 15, playing the guitar. She hadn't told me, I didn't know until I saw this picture. Back then it wasn't something you did as a job and they dropped it and never spoke about it.
You are in a band called Pribiz, explain the name to me.
It is a piece of my surname. When we started it was just me and my brother, so it was just a family thing. Then we realised we needed a bit more colour in the music and needed other people to join us. When we got new members we wanted to make them part of the family, so the name stayed.
There are already ex-band members from your band.
Having a band is like having a relationship with how ever many members you have. We broke up as we were concentrating on making an album and not doing that many concerts.
You brother stuck with you?
Yes, he is still in the band! Then an old school friend, Oriol, joined me. The new drummer was a huge change as I had been used to the old one and we had been musically connected. But I have got used to it. We have a female singer, Judit, and she plays the keyboard, too. She has a great voice, it gives the songs another level.
You have won a Movistar contest?
Yes, it is a very new contest. They used to do it for just festivals but now they have added the band part. Friends told me about it. They said that if we won it would pay for the recording of our album. We had a huge amount of support from friends and social media.
So you won and did it pay for your first album?
Yes and it is out now.
What is it called?
Carousel.
Let's talk about your music. You sing in English and you live in Catalonia….
Yes, it a crazy decision!
Is it really? Because if you turn the radio on here the majority of the music is in English.
Yes, your are right. Once you make the decision and people see what you are doing they end up accepting it. But to start with it was hard. People kept asking why we weren't singing in Catalan. I tried once but it didn't work. English is my way of explaining myself. I am more comfortable, more myself in English. At least with this project. Maybe in the future I can try another language.
'A band is like a relationship' 'A band is like a relationship' 'A band is like a relationship' 'A band is like a relationship' 'A band is like a relationship' E-mail
Leave a comment
Sign in. Sign in if you are already a verified reader. I want to become verified reader. To leave comments on the website you must be a verified reader.
Note: To leave comments on the website you must be a verified reader and accept the conditions of use.