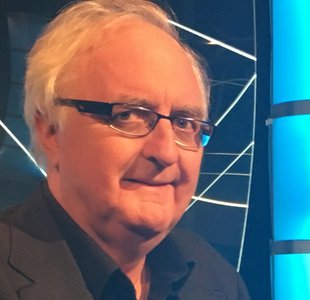 Peter Bush Each Wednesday evening El Punt Avui Televisió airs the series of interviews, Catalan Connections. Marcela Topor recently talked to prize-winning English literary translator, Peter Bush.
catalan connections - marcela topor
You’ve recently been awarded the Memorial Francesc Macià prize from the Fundació Josep Irla, in recognition to your contribution to promoting Catalan language and culture. How do you feel about it?
It’s a great honour to get such an award. It was a real surprise as I wasn’t expecting it, and all of a sudden I get this call from Barcelona. Apart from the individual, personal aspect to it, I think it’s excellent that literary translation as such gets recognition publically, in Catalonia and elsewhere, because often literary translators are kind of invisible people. People read translations in Catalonia all the time, but often they don’t think this is the work of somebody, of a literary translator.
You translate from French, Spanish, Portuguese...how did you discover Catalan?
If it hadn’t been for my wife, Teresa Solana, I would probably never have translated any Catalan literature. When I was in Cambridge, there was quite a Catalan aspect to the Spanish literature and language course I did, so I read a lot about Catalonia in the Middle Ages and the Catalan Empire. I also read Aproximación a la historia de España, by Vicens Vives, and that had a big impact on me. When I went to Oxford, I started doing research eventually on the relationship between intellectuals and working class organisations in Spain, and I came to Barcelona to work on that.
Where did this interest come from?
My father was an active trade unionist; he was quite political. In fact he volunteered to go into the army in 1939, when he saw the fall of the Second Republic. He never came home in six years, and I was born after my father came home from the war. I’m from the county of Lincolnshire, very rural and agricultural, my grandfather was a shepherd, and my father was a print worker, he was one of the few children in the family of 16 who didn’t want to work on the land. When I was growing up, the house was always full of newspapers, there weren’t as many books, but there was always talk of these prints and papers and journalism.
You lived in Barcelona for more than 10 years, before moving to Oxford...
In 2002/03, my wife, the writer Teresa Solana and I, both gave up our jobs to come and live in Barcelona, as we were going to have our daughter. One day I was approached by an English publisher who asked if I was interested in translating Quim Monzó’s La magnitud de la tragèdia, although I had never done such an extensive translation before. Then followed T’estimo si he begut, by Empar Moliner. I wanted to translate more classics, so I did La Celestina, by Fernando de Rojas, and when Edwin Frank, from The New York Review of Books, asked me if I knew anyone who could translate Josep Pla’s El quadern gris, I offered immodestly. Then followed Joan Sales’ Uncertain Glory, one of the greatest novels about the Spanish Civil War. I’ve also just finished the translation of its sequel, El vent de la nit (Winds of the Night).
What about recent and future projects?
I’ve just finished another classic, Josefat, by Prudenci Bertrana, translated into English for the first time. Also another book by Josep Pla, Aigua de mar, which probably will be more difficult than El quadern gris; a book of 20 short stories I’ve selected for Oxford University Press, called Barcelona Tales, with authors from Narcís Oller to the present. And finally, Matèria grisa, a book of short stories by Teresa Solana.
Is there a a growing interest for Catalan literature and culture on the English language market, is Catalan culture better known nowadays?
Now there is a body of work of Catalan authors translated into English, and so Catalan literature has more presence both in the UK and the US and now people know who Josep Pla and Joan Sales are. In 2014, The Economist said that Uncertain Glory was one of the 10 top works of fiction in 2014, and things like this make Catalan literature very visible.
What are the main challenges in the job of a literary translator?
Re-writing, putting yourself into the skin of the language of the writer. I can’t possibly put myself into the consciousness of Bertrana or Pla, but I can attempt to put myself deep into their language and the only way you can do that is by writing, re-writing, and re-interpreting. When I first read Josefat, I asked myself whether I could translate it because the language is very complex and dense, but that’s the adventure of translation, with each novel you have a set of different challenges and the interest in the work of the translator is meeting these challenges, developing different styles for different authors, and, of course, for different books. The challenge is to invent an English style that is as close as possible to the style of that particular writer in Catalan. And this is what I like most about this job.
Deep inside the language Deep inside the language Deep inside the language Deep inside the language Deep inside the language E-mail
Leave a comment
Sign in. Sign in if you are already a verified reader. I want to become verified reader. To leave comments on the website you must be a verified reader.
Note: To leave comments on the website you must be a verified reader and accept the conditions of use.