L'Esportiu L'Econòmic Catalonia Today Club del Subscriptor
Crime between two worlds Crime between two worlds Crime between two worlds Crime between two worlds Crime between two worlds E-mail
Going native - Neil Stokes
How are you finding living in Britain?
For me it is a very positive experience because I’m a writer, so I work at home, I live in Oxford, which is a very cosmopolitan place where people from abroad are welcome. I don’t have any problems in that sense. Now I think is a difficult time for people from abroad that are living in the UK with Brexit and the political situation. Despite that, I am used to travelling from Britain to Barcelona very often, because here I have part of my life, you know, my mother, my brother, my friends... and also my publishers.
How long have you been writing crime novels?
Well, I published my first book in 2006, but I could say I’ve been writing all my life, you know, short stories or even other novels that I never tried to publish. But with the first crime fiction novel that I wrote, my husband convinced me to take it to an agent, so I tried, and it worked! Since then I’ve been writing novels because the first one worked very well, and it was translated into several languages.
What caused you to choose crime fiction?
In fact, when I wrote the first novel I didn’t think that I was writing crime fiction, I thought I was writing, you know, a novel with a lot of irony about our society, with a critical point of view. But then my publisher decided that wasn’t true, that it was crime fiction, because it’s true that in the book there are murders, an investigation and so on. Then I realised that crime fiction worked very well in order to let me explain the kind of things I wanted to talk about.
Do you think your time in Britain has influenced your writing in any way?
No, but the thing is that in my last book of short stories there appear English characters, although the plot, the scenario, is not in England, because there appear people from Barcelona, so I think that is the influence of living there. In the future, I think I want to write about more British characters.
Why is it so popular to write crime fiction? What do you think people get out of it?
Well, I think that people enjoy the enigma and the mystery and to find out who done it, but also because crime fiction is a genre that allows one to write with a very critical perspective about our contemporary society, so that one can really portray how a society works. I think that’s what people want to find in a novel; not just the mystery, but also the other things that explain the kind of society where we are living in.
You have now become a member of the Crime Writers Association. Is it possible to compare that to the community of crime writers here in Catalonia?
The thing is that the Crime Writers Association has much more money to do things and many more members; it is a very, very big association. But it’s true that here writers are also very active and organise a lot of things with few resources. In my case, I’m a “rara avis” in the association because English is not my language, and there are not so many members in the association that don’t have English as their mother tongue.
Let’s talk about your latest book, Matèria grisa. What is the story behind it that made you want to write it.
There are eight short stories that are completely independent, but one of the particularities of the book is that all the stories are connected through the different characters. It’s not a novel at all, because the stories are completely different, but everything is connected, so when the reader reads them, he discovers these connections that the characters are not aware of.
What makes a short story more of challenge than a novel?
Both of them are difficult. I don’t think that writing a novel is easier than writing a short story. A short story is really difficult to write too because you have to explain a lot of things in only a few pages and you have to decide what to keep, what is important, what not...I believe that in a novel you have more freedom to write about more things.
How do you come up with new ideas without repeating anything from other writers, for example thinking of different ways to commit the murder?
In the first or the second novel that I wrote it was easy, you know, because it was the first time and I think I chose poison for the first one and in the second just an impact to the head. But it’s true that in the next ones I was going to use the same ideas but I realised that I couldn’t repeat them, so in one of my novels I think I decided to use a radioactive poison – because I love poison. And on the other hand, every victim requires a different way of being murdered because it also depends on the personality of the murderer or on the circumstances; it has to make sense. 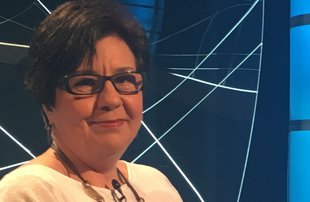