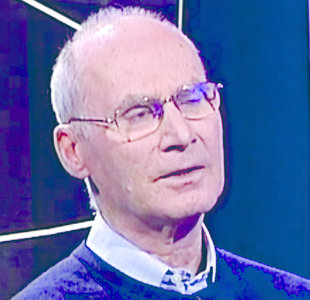 Henry Ettinghausen Each Wednesday evening El Punt Avui Televisió airs the series of interviews, Catalan Connections. Marcela Topor recently talked to the British writer and retired professor, Henry Ettinghausen.
catalan connections - marcela topor
Your surname doesn’t seem very British.
In fact it is German, it’s the name of a tiny village in the middle of the Germany. It’s the name my father’s ancestors chose but they didn’t come from there. My grandfather was born in Paris and his parents decided to move to Britain in 1886. He went to Oxford to study Oriental languages and then he became a successful antiquarian and bookseller. He worked for Maggs Brothers until the Second World War, running their Paris shop with my father, but they managed to escape before the Germans marched in. My mother was sent to England to have me in 1940 and then my father followed her. I was born in Hampton in Middlesex.
Your passion for languages runs in the family.
Yes, my father was a good linguist, my son and grandson too. I went to Oxford to study French and Spanish but I got in on French and German, because they were the only modern languages taught at my school. I knew I didn’t want to carry on with German. And because of my grandfather’s connections with Spain and Portugal, I thought maybe Spanish, but I didn’t know any Spanish. But I asked at the interview in Oxford, that if I manage to learn enough Spanish in the summer, would it be possible to take up Spanish when I arrived in October? Oxford is a very old-fashioned sort of place; I was pretty sure they would say no, but they said okay. I went to Madrid for a few months and stayed with an old antiquarian bookseller friend of my grandfather, and began in Oxford speaking Spanish better than my colleagues who had studied Spanish at school, but I never read a book in Spanish.
That was a challenge!
The challenge of not having read a book in Spanish and then having Spanish literature thrown at you from day one. In those days if you did two languages you had to concentrate on mediaeval and golden age Spanish literature I had no idea about; that was a dual challenge.
Then you became a specialist in Quevedo.
Yes, when it came to choosing a topic for a thesis, I preferred literature under the 2nd Republic or during the Civil War, but my Oxford professor suggested it was easier to get a job at the university if I took a well-known classic author, so the subject of my thesis was Neostoicism in the work of Francisco Quevedo.
In 2003 you received the Sant Jordi cross for promoting Catalan language and culture in the UK.
That all began in Oxford where I was introduced to a lady called Mercedes, in 1959. In 1962 we were married. While in Oxford I learnt Catalan by the bicycle method, which is cycling through Oxford while practising irregular verbs.
Now you live permanently in La Pera, in Baix Empordà.
We started coming to Catalonia every summer where Mercè’s family live, and in 1967 we spent a few weeks in La Bisbal with her uncle and I fell in love with Baix Empordà. We started looking for a house for the summers but with no luck because in those days there were hardly any estate agents or houses for sale inland, just on the coast. Having failed the first year, the next year we went to the only estate agent in La Bisbal and he said he could show us three houses, but after seeing the first one in La Pera, we didn’t want to see the others. It was Cal Fuster, a tumbled down house. We paid the equivalent of 700 euros, which was a lot back then. We started spending the summers there while I taught in the UK. We moved to Southampton in 1965 and I became professor of Spanish in 1983.
You also taught Catalan.
Exactly, Mercè and I started teaching Catalan in 1976. I spoke it quite well but had never studied it and so at the start I stayed a lesson or two ahead or my pupils. We had a course in Catalan and one on contemporary Catalan literature.
And you wrote books, including La Vall de la Pera.
It’s part of a series by the Diputació de Girona on the towns in the province and nobody had done one on La Pera. Being retired, I could spend lots of time in the archive and I talked to many people in the municipality. It was a collective effort.
Tell me about your other book, How the Press Began.
I came across some 17th century Spanish autobiographies. Then looked at what was going on in Europe at the time and ended up writing this book which is also available free online. The earliest printed news pamphlets date to 1470, just 20 years after Gutenberg starts printing. It’s something that takes off with printing and turns handwritten letters into a mass industry with a mass readership.
How do you see the Catalan independence process?
Things are coming to a head in a way few people would have imagined. Unfortunately, I can’t vote because you need Spanish nationality to vote for Catalan independence, but I hope that sooner rather than later, Catalans will be able to achieve what most of them want.
Between Oxford and Empordà Between Oxford and Empordà Between Oxford and Empordà Between Oxford and Empordà Between Oxford and Empordà E-mail
Leave a comment
Sign in. Sign in if you are already a verified reader. I want to become verified reader. To leave comments on the website you must be a verified reader.
Note: To leave comments on the website you must be a verified reader and accept the conditions of use.