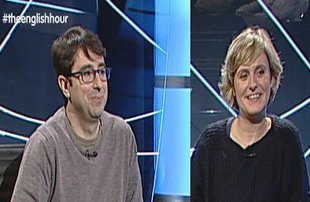 Albert Quintana & Elisenda Sanz. Every Monday, English Hour airs the interview series Going Native. This time Neil talks to two scientists researching mitochondrial disease.
Going native - Neil Stokes
How did the Quintana lab come about?
ES: We had both gone to Seattle to do post-doc degrees in neurobiology and were in neighbouring labs, which allowed us to collaborate on various projects. After we finished our post-doc studies we felt confident enough to set up a lab and then came the opportunity of European funding. Albert got a starter grant from the European Union that gave us the chance to do the same research we were doing in the US but in a lab in Europe, and so we came back to Barcelona.
Was it hard getting funding from the European Union?
AQ: I think the success rate is about 10%. It is a two-step process: first they evaluate the excellence and novelty of the project, plus the CV of the person applying. If you get through that step, which is the most complicated one, you are invited to Brussels to present your project to a panel of experts. Get through that, and you get the funding.
You have a great little video explaining what you do. How important is it to reach out to the public?
ES: It is especially important for us because our work relies on public funding. So we have to let people know what we are doing and how our research is useful and how we hope to one day find a cure. It's hard, because we aren't trained for that, but we have to communicate with people and let them know what we are doing with their money.
What exactly is mitochondrial disease?
AQ: Mitochondria are like the powerhouses of the cell, and every cell in your body has mitochondria. It basically turns all the nutrients you eat into energy. Now, imagine a power station in a city stops working, you get power failure and things start to go wrong. So it is a vital part of cell function and there are some cells that need this energy, like in the brain. For example, in a city, hospitals need power all the time. It's the same in the body and when the mitochondria are not working, those cells fail and it develops into a serious group of illnesses called mitochondrial diseases. They usually affect children and so far we don't have any effective treatment or cure for them.
What do you do in the lab?
AQ: One mitochondria, depending on where it's living, is completely different to mitochondria living in the cell next door. So, we want to know what makes a mutation affect every single mitochondria in your body and yet only specific sets of neurons die, which is what makes the kids ill. Unfortunately in most cases those kids die because of those neurons that cannot stay healthy. And yet there might be a neuron next door that is completely healthy and ignores the mutation. So, our goal is to find out what makes one neuron survive and another one die, and thinking in terms of energy, what is that neuron using? Does it have some kind of generator keeping it alive? Or is there something lacking in the other? If we can figure it out, we can come up with a treatment to make the neurons survive.
Why children?
AQ: As I said it is energy that is affected and when you are growing up you need a lot of energy, the brain is developing and that's when you see the effects of the disease. In some cases, kids don't make it beyond three or five years. Also it is a very rare disease, so it is hard to get funding from non-public sources. If you are a big company, and it is a disease that only affects a few kids, well you're not going to spend millions on something that is not going to give you any return.
How many children does it affect?
ES: I think it's one out of every five thousand, so it's considered a rare disease. In an ageing society, pharmaceutical companies are more interested in ageing related diseases.
AQ: A problem is that mitochondrial disease is like a big umbrella that covers lots of illnesses and each has its specific features. So, if you focus on a little sub-set of mitochondrial disease that makes it even less frequent. For example, the one we study affects one in 40,000 kids. But the mechanism of what is going wrong is not that different from what is happening with other mitochondrial diseases.
How does this disease show itself in children?
AQ: It usually takes a long time for parents to get a diagnosis. These diseases are rare and there are not a lot of doctors specialised in that. It usually starts with parents noticing there is something that is not normal about their child: they are not holding their heads up like other kids or often that the kid is not smiling. In fact, what we like to say we are doing is trying to bring a smile back to these kids. But the unfortunate thing is that even if you get the right diagnosis, there's not a lot we can do about it. Now there is a big push to make a national registry of all the patients with mitochondrial disease so at least you can group them and have larger numbers of patients, and that is probably going to help research.
Returning smiles to kids' faces Returning smiles to kids' faces Returning smiles to kids' faces Returning smiles to kids' faces Returning smiles to kids' faces E-mail
Leave a comment
Sign in. Sign in if you are already a verified reader. I want to become verified reader. To leave comments on the website you must be a verified reader.
Note: To leave comments on the website you must be a verified reader and accept the conditions of use.