L'Esportiu L'Econòmic Catalonia Today Club del Subscriptor
Woven into the cultural fabric Woven into the cultural fabric Woven into the cultural fabric Woven into the cultural fabric Woven into the cultural fabric E-mail
How did La Capona get started?
La Capona began with a crisis in another bookshop in Tarragona, where I worked with the other two partners in this business: Pau and Ricard Espinosa. It opened in 1997 with the idea of starting a new and different bookshop. And now we have accumulated some 24 years of history.
So, it’s a success story.
Yes, it has worked out for us.
Yet, more than just a bookshop, La Capona has also become a cultural centre for Tarragona.
The bookstore trade has an added flavour: the fact that we are integrated into the city’s cultural network. It is satisfying to collaborate with various initiatives, from distributing solidarity calendars to selling tickets for events. Of course, this opens the door for us to sell books, but it also means being part of the local cultural fabric.
How has La Capona changed since it began?
When we started we were, if not the first, at least the second bookshop to implement something that surprised people: we didn’t put prices on the books but instead installed a system of barcode readers. This system has since been installed everywhere. Also, along with other bookshops, we started experimenting with a management software called Galatea. Because of the amount of books that we get every day. Without the support of these programs, it would be impossible to absorb everything. Seen from the outside, the management of a bookshop has an aura of romance, but inside it is hard work, although it is also compelling. To give you an example, if you were to have walked into a bookshop in 1990, you would have seen people working there, and if you walk into the same bookshop today, you’ll often find the same people.
You’re an example of that.
Yes. You see the same people, not just the owners but also the employees. If one bookshop folds, the employees often end up opening another one. This sets us apart from the rest of the retail sector. In addition, it’s a self-training job, and you need at least four or five years experience before you can serve behind the counter.
How have you coped during the pandemic?
With some uncertainty. We live from day to day. We all had to be inventive. For example, the Open Bookstores initiative made us visible, and I think at that time there were a lot of people who had only just discovered bookshops! And selling online has also worked for us.
Have book sales gone up or down as a result of the pandemic?
They’ve increased. Since we reopened the shop in May, book sales have gone up compared to 2019. For now, this trend seems to be continuing.
Is selling online the key to the future of bookselling?
I see it more as a complement. To buy books online you need to know very well what you’re looking to buy. And that kills what I was saying about the aura of romance. I’d be disappointed if online shopping became more popular than people coming to bookshops. 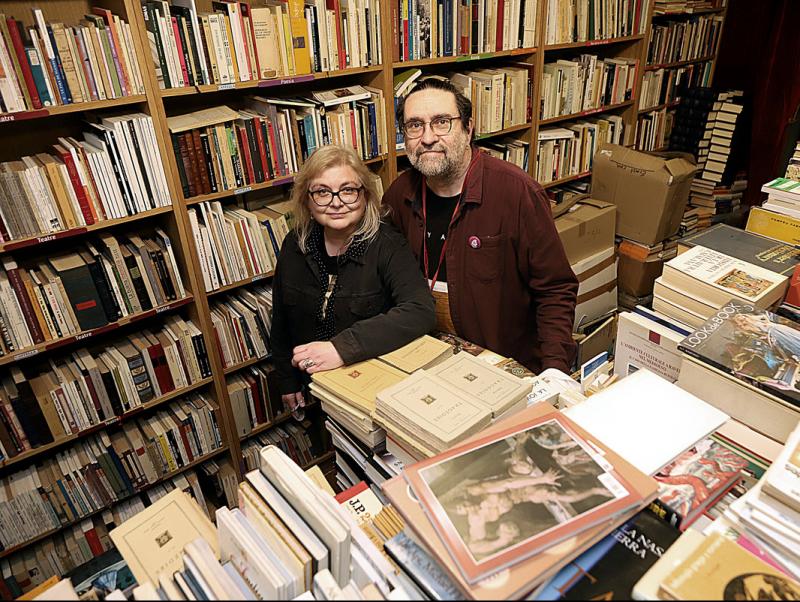