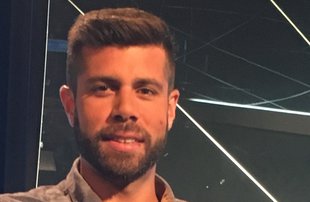 Manel Vehí Every Monday, English Hour airs the interview series Going Native. This time Neil talks to Manel Vehí, bar owner, mixologist and champion cocktail bartender.
Going native - Neil Stokes
What is a mixologist?
A mixologist is a bartender who creates cocktails.
Where did it all begin?
I used to work in the family bar in Cadaqués, called Bar Boia. Then one day someone from El Bulli restaurant came and asked me to work with them. So I worked there from 2008 to 2011. Then I went to Chicago to work in The Aviary, one of the best bars in the US, and there they taught me how to make signature cocktails and different techniques, and this is how I started.
Now you also have a cocktail bar in Barcelona?
Yes, it’s called Doble by Manel Vehí, on passeig de Gràcia. It’s decorated like the 1920s in the US, we have live music and the atmosphere is super-chilled.
How did you go from being a waiter in El Bulli to becoming a top mixologist?
My cocktail style is very gastronomic. I try to put the things I learnt in El Bulli into my cocktails. So, we play with different textures, foams, temperatures. And it is this that makes my team and I different from other bartenders. Our menu has about 35 cocktails but no classic cocktails, although if someone asks for a classic cocktail we will do it.
What is the process of inventing a cocktail?
I’m used to travelling a lot. For example, in the past five years I have lived in Costa Rica, Mexico, Brazil. And what I do is go to the different markets and try the fruit, and when I taste the fruit I imagine what kind of liquor could go with it. Or, for example, I might be walking my dogs in Cadaqués and I smell lavender and that gives me an idea, because I also use products from where I live. It’s an inspiration thing, and then experimenting. We try it out a few times and give it to our guests; if they like it we put it on the menu. In fact, sometimes we don’t know what name to give it so we put it on Instagram and Facebook and ask people to give it a name. The one who gets the most likes is the winner and they win a cocktail.
Do new cocktails have to be registered?
With the classic cocktails everything is registered. While you can do what you want in your own bar, normally the classic cocktails should be done in the established way. With new cocktails, we catalogue them and put photos on our website, but we don’t register them because it is super expensive. And anyway, it doesn’t matter because if the cocktail has 50mg of vodka and 25mg of lemon, another bartender could just do the same recipe but use 30mg instead of 50mg and 15mg instead, then it’s no longer your cocktail.
Do bartenders steal each other’s ideas?
Maybe someone who comes to my bar steals my idea, but I don’t care because we are always trying to do something new. You have to be imaginative rather than copy. Generally there is little rivalry; all the bartenders in Barcelona know each other, from the competitions and so on, and we’re friends. If you need some help, you can just call one of them. Also, every mixologist has his own style.
Do you ever go back and change a cocktail recipe?
Once we put a cocktail on our menu, we don’t change it. Imagine you came to Boia three years ago and tried the Zombie, for example. And then you come back to Cadaqués this summer, looking forward to trying the same Zombie you had three years ago.
And you’re also a cocktail champion?
I won the GinMare national cocktail competition in 2015 and then went to the international one, representing Spain, and I won it. It was in Ibiza; it was a great experience and I met a lot of nice people. I had to make two signature cocktails and a gin and tonic. For example, the gin and tonic I did was a tribute to my Greek family, who were coral fishermen, so I used GinMare with a little plankton, sea fennel from Cadaqués, tonic water and then oyster leaf, which comes from Iceland and tastes like an oyster.
And sometimes you don’t know what you will have to make beforehand.
They just give you a black box and you have to make a cocktail with whatever products are inside . For example, the last one I did was the Excellence Project in Madrid. There were 16 mixologists and 16 bartenders still at school to act as assistants. In our black box we had a Laphroaig whisky and shiso leaves from Japan, and we had 18 minutes to do something with this. Behind us was a little supermarket, so the bartender was back and forth getting the products I sent him out for. And we did a cocktail with two temperatures and two textures. Three teams went to the final, and we won it.
Is there a capital of cocktails?
The best bars in the world are in London, and the US is also strong. But Spain is growing and in Catalonia we are growing very fast. Here we do different things rather than the classics. In Barcelona and Girona there are lots of places doing great cocktails.
Shaken not stirred Shaken not stirred Shaken not stirred Shaken not stirred Shaken not stirred E-mail
Leave a comment
Sign in. Sign in if you are already a verified reader. I want to become verified reader. To leave comments on the website you must be a verified reader.
Note: To leave comments on the website you must be a verified reader and accept the conditions of use.