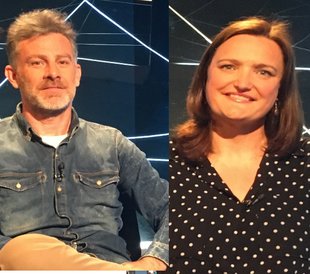 Daniel Jacobs and Carrie Lillie Every Friday evening on El Punt Avui Televisió, Nicole chats with an English-speaking expat. For this month’s interview, she had a chat with Daniel Jacobs and Carrie Lillie from Project B theatre.
small talk - Nicole millar
Daniel, tell me about your background.
I was born in Egham, just outside of Windsor. But all my family moved down to Hastings when we were little. I went to University in Brighton, and lived there afterwards.
How did you end up in Barcelona?
I was a social worker for many years, and I decided to take a break. The typical story: I came here to take some time out, learn a bit of Spanish and never left.
You decided to do something totally different?
Kind of, I studied drama at school but decided I should get a ’proper job’. When I took this break, I felt like I wanted to go back to something I had been really passionate about. I used to write when I was younger but I hadn’t written anything for 15 years, so I immersed myself in that again. I also really got back into the world of theatre, acting and producing.
Carrie, where are you originally from?
My family are originally from London but I grew up mostly in Swindon. You say that Swindon is statistically average, what do you mean by that? It is! They do a lot of market research there, because it is statistically average. There isn’t any great wealth there or poverty. There isn’t much variety, it is average. If you are talking about the average British person, you are talking about someone from Swindon. It was a spillover town, located between Oxford and Bath. When London was expanding, people moved to Swindon, as they could commute back and forth to London.
You also live in Barcelona. How did you end up here?
Friends of mine where talking about moving to Spain and I thought: if you go, then I am going too! They went to Almería in the south of Spain and I came to Barcelona. My brother was living here, too.
For both of you, what is it about Barcelona that is so amazing?
Artistic things, interesting projects. Architecture, we have coast, we have mountains. There are many interesting things going on. The artistic opportunities are more plentiful.
Carrie, like Daniel, you started off doing something completely different to what you do now?
I studied Environmental Science and German. I worked in an environmental consultancy for many years. I was working in front of a computer a lot and dealing with engineers and it didn’t suit me. When I decided to come to Spain, I studied a teaching course so I could teach out here and discovered I really like it. It also gives me the flexibility to write, act and sing.
You also sing in two choirs?
I sing in the Barcelona English Choir. We sing mainly in English but 50-60% are Catalan, the other quarter are English and the rest are from around the world. It’s a really nice mix of people. And the Barcelona Gospel choir is a purely Catalan choir. However, most of the gospel that we sing is in English, as it comes from the States. We also sing a little bit in African languages: Zulu, Swahili, Swazi, which are beautiful.
In 2011 you formed Project B together with a few others.
I met Carrie in 2010 in the theatre and along with three others we started chatting about our ideas and what we wanted to do. Then we thought: why not, what is stopping us? Six productions on and we are still here.
What are the backgrounds of the other three involved in the Project?
Mary is from the US, she is a teacher and works with Carrie. Sarah Pickles is from the UK. She does all sorts of things but is also a voice-over artist and, sadly, moving back to the UK. Francois is from South Africa but came to Catalonia when she was 15. She teaches English, but she is also a graphic designer.
Explain to me exactly what Project B does?
We write, direct and produce original theatre. Something that hasn’t been written by someone else. We have had guest writers but we generally do it ourselves. It’s all in English and goes down very well. There is a big English theatre scene in Barcelona. Our audience is about half and half native speakers and people wanting to learn English as another language.
Your first full-length production is your sixth, called Brunswick Square.
Mainly we have done shorts before, and they have been based around a theme. But we made a decision to try something different.
Isn’t it an all female play?
The writer and director is me, a male! But no male actors appear on stage. I had the idea for a long time; I liked the idea of having all women on stage. You don’t tend to see that very often. I have been surrounded by women my whole life. The stories have built up over years. www.projectbtheatre.com
There is always a Plan B There is always a Plan B There is always a Plan B There is always a Plan B There is always a Plan B E-mail
Leave a comment
Sign in. Sign in if you are already a verified reader. I want to become verified reader. To leave comments on the website you must be a verified reader.
Note: To leave comments on the website you must be a verified reader and accept the conditions of use.