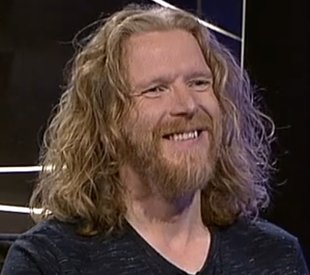 Halldor Mar Every Friday evening on El Punt Avui Televisió, Nicole has a chat with an English-speaking expat. For this month’s interview, she had a conversation with Icelandic musician and classical guitarist, Halldor Mar.
small talk - Nicole millar
You are from Iceland, tell me about it.
Iceland is a very special country, and of course it’s my country. It’s an island in the far north, if you go any further north you get to the North Pole! It’s a small country, with around 320,000 people, that’s all. And next year we’ll be the smallest country in the World Cup in Russia! It has very special nature. If you want to visit Iceland you should prepare for bad weather and beautiful nature.
You’ve lived in Barcelona for 23 years. What brought you here?
I came here initially to study classical guitar for a year or two with an Icelandic teacher who was living here. He has a school in Barcelona. I thought it would be good to come and see a big city in the south with great weather. And then my plan was to go to Germany. But I fell in love, one thing led to another and I stayed. She is now my wife and mother to our three children!
Are your parents musical?
Yes, they’ve always sung. My mum’s always sung in the church choirs wherever we’ve been and plays the flute. My father sings in a very famous choir in Iceland, a male choir that’s been going for many years. There was always a lot of music in my home, it’s been part of my life.
Why did you want to study classical guitar?
Basically, I dedicated my life to playing pop and rock music. But classical guitar has a lot of charm, it’s like a world in itself. There aren’t many of us. All the classical guitarists in the world know each other; we’re like a family. As there aren’t many of us we’ve all been to the master classes. Barcelona seemed to be the centre of classical guitar with classes from the best.
While you were learning the classical guitar, where did you see yourself going?
I thought I would be playing concerts, maybe doing some classes and travelling around the world playing. It’s a very difficult world and concerts demand a lot of concentration. I used to get stage fright, as what I was playing is so complicated. There’s so much practice that goes into it, just to play a one-hour concert well. So when I started to play in bars, I thought to myself: “Wow, there are hundreds of people listening to me and enjoying this and before I played the classical guitar there were maybe only 10 people listening to me.”
You’re well known in Catalonia for your album ‘Winds’, which is Catalan songs sung in English?
The translation was team work, it’s hard to translate, it isn’t always a direct translation. I obviously know English but it’s always good to have a native speaker on the team.
Where did the idea come from?
It all came from a beer commercial for Estrella Damn. They were looking for a song in English from Catalonia. They asked me to try singing two songs, one as the original and the other in English. And they chose that song; without that there wouldn’t have been an album.
You release a new album in November?
Yes, songs in Catalan and English, an album with a couple of covers and all the rest are originals. It’s called ‘Record’. I’m so grateful to the Catalan people who enjoyed ’Winds’ that I wanted to give something back, so originally I wanted all the songs to be in Catalan.
Your latest project is not music-related at all, it’s a TV project?
They wanted me, as they wanted someone who is related to what the TV programme is about, someone who had been through the same process as the people in the programme. We’re looking for people who are learning Catalan in their own country. So, we go to Japan, San Francisco, Buenos Aires, Montreal. There are a lot of people all over the world learning Catalan.
Can you tell me one of the stories you found interesting?
There are so many stories, from people who collect languages. But there’s this one story about a boy from Argentina. He was having a really bad time, he had agoraphobia. He couldn’t go out and had been inside his home for over a year. But he had been watching a Catalan TV programme in Spanish and he wanted to continue watching it is Catalan. He didn’t understand so he decided to learn Catalan and had to leave the house to go and take lessons. Thanks to this he’s better now and recovering. He can move around the city and go out. It’s a tremendous story.
What was your favourite place you visited?
Difficult to say but I think Japan, as it’s so different. Lost in translation, it’s all true. But I also enjoyed going to San Francisco and Montreal.
Did you find anyone in Iceland learning Catalan?
Yes, but we couldn’t fit it into this season. Hopefully there will be more seasons and we can go. The whole world speaks Catalan!
North meets South North meets South North meets South North meets South North meets South E-mail
Leave a comment
Sign in. Sign in if you are already a verified reader. I want to become verified reader. To leave comments on the website you must be a verified reader.
Note: To leave comments on the website you must be a verified reader and accept the conditions of use.