This book is the latest in a series of “Big City Food Biographies”. Food, argues the series editor, is as big a factor in cities’ culture as famous artists and glorious buildings. Song and Riera’s biography of Barcelona contains six lengthy chapters and is as stimulating as the food they talk about.

Their first chapter looks at Catalonia’s renown today as home to Michelin-starred chefs, with brief accounts of the leading names. It focuses on the most famous of all, Ferran Adrià, and his cooking revolution “without limits” and “with science”. Despite the cult of upper-class hedonism that surrounds his name, Adrià is not arrogant. His ambitious aim is simply expressed: to reach all five senses with his enjoyable creations, not just smell and taste. Hearing, sight and touch bring added joy to the eating experience. Song and Riera go further than most accounts of this well-documented revolution, by placing it in its political and cultural context. The 1970s transition led to a new demand for better food in Catalonia; and the growth and development of a national cuina (cuisine) is interlinked with the growth of a new national identity.

The second chapter analyses medieval cooking. The famous cook-books, the Book of Sent Sovi from the 14th century and the Llibre del coch of 1490 by Mestre Robert (the Catalan King of Naples’ Catalan cook), show what the upper classes ate. Just as today, many of the well-off were concerned to eat healthily, which means living longer. And just as now, many thought mistakenly that to eat well was to eat a lot, like the notorious roast peacock recipe. The poor, of course, just wanted to get hold of anything at all to eat. Lack of food underlies many, even most, of the riots, strikes and upheavals that have made Catalonia such a richly cultured, in the political sense, society.

Song and Riera explain the history of Catalonia as an imperialist state, with ruling-class wealth and leisure spurring a desire for culture, i.e. art and pleasure, whether this be poems or exquisite food. That they see cooking styles and food fashions as aspects of the development of a nation is really their book’s strength and originality throughout.

Chapter 3, “Cooking up a Nation”, was the most fascinating. After pages on the decline of Catalonia and its subjection under the centralizing Bourbons, it enters into detail on the rise in luxury trade post-1714. “Riding on the coattails of the Spanish economy,” Barcelona imported and exported, with particular relish for chocolate. The authors enter into detail on what was needed in terms of food when the king visited, with a retinue of 2,300 people, in 1802. In the later 19th century, with the twin processes of Catalan Renaissance and capitalist industrialization in full swing, luxurious cafés and restaurants opened their doors. I was ignorant that then – not just recently, but 150 years ago – Barcelona became a major tourist centre as “a city of dazzling cafés” with huge salons, stylish ladies’ bathrooms, marble columns, grand pianos and garden patios. Not all was glamour. At this time, too, a newly formed working class was beginning to eat out, as its working hours were long. While fancy restaurants cooked French cuisine, the authors claim that “it is in the taste and eating habits of the working class that we can see the roots of Catalan regional cooking that prevails today.”

Women in the market

Its chapter 4 tells how Barcelona’s 39 fresh-food markets, built originally of iron and glass, were, like sewers, paving-stones and street lighting, part of mid-to-late 19th-century modernization. Food sold off stalls in the street created smells, vermin and rubbish – and stall-holders’ vulgar language was thought offensive. In the market, vendors and their products could both be made attractive to visitors and be controlled more strictly. Markets also became important socially. Workers were mostly women, as were their customers. Catalan was used there, even in the darkest times. Song and Riera are good on how markets, like cafés and restaurants, are places that sew a neighbourhood’s social fabric. The stall-holder’s not a friend, but she knows you, she may listen to your problems and will give you cooking tips.

Chapter 5 follows the trail of Pepe Carvalho, Vázquez Montalbán’s detective, through the city’s restaurants. This is not wholly effective. Not all the restaurants cited are ones frequented by Carvalho; and nor is Vázquez Montalbán a paladin of “slow food”. It’s true he himself cooked traditional foods slowly and ate slowly with long sobretaules (after-dinner conversations), but the idea of “slow food” today has ecological and health connotations. Vázquez Montalbán was a great novelist and excellent political analyst. He wrote a lot and well about food, but ecology and the healthy Mediterranean diet were not part of his praxis.

The food biography is rounded off with a sixth chapter giving traditional recipes, along with their background. A Taste of Barcelona is satisfyingly historical and class-conscious. The authors understand that rich and poor do not eat the same. In examining the roots of modern Catalan cuina, they see them in the rural dishes of the poor, for in the 19th century the big-city food fashion of the upper class and new middle class was French cuisine. This enters a terrain of debate on which I am not qualified to have an opinion. Ferran Adrià says that he started out with French cooking: the neighbouring country was where you went to learn. His ideological opponent in cooking styles, the late Santi Santimaria (1957-2011), thought Adrià’s use of chemistry to reinvent food was artificial and had little to do with Catalonia’s food tradition.

Two small criticisms. The use of ’Barcelona’ in the title is forced, as the book is actually talking about Catalan cuisine, but what else could the authors do if they were writing it as part of a Big City series? More seriously, their book is at times poorly edited and awkwardly written, making it sound as if it had been translated to English by a non-professional translator. Despite the irritation this lack of fluency may cause, the book is a pleasure to read, full of off-beat information and insights into food (of course!) and, more widely, into Catalonia’s history and culture. 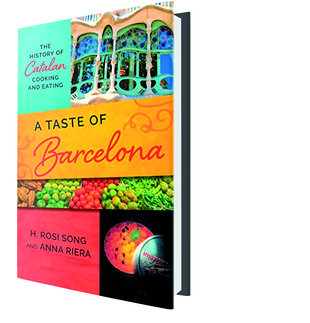 A TASTE OF BARCELONA The History of Catalan Cooking and Eating Authors: H. Rosi Song and Anna Riera Pages: 240 Publisher: Rowman and Littlefield (2019) “Song and Riera take readers on a mouth-watering journey into the delights of Catalan cuisine and gastronomic history,” Maria Astrand, Barcelona Food Experience

Rosi Song is a professor of Spanish at Bryn Mawr, the liberal women-only college in Pennsylvania. Her 2016 book, Lost in Transition: Constructing Memory in Contemporary Spain, is an analysis of how several writers and film-makers in the 2000s were interpreting the 1970s transition.

Anna Riera is a Catalan writer and teacher on food. She is Director of Postgraduate Studies in Gastronomic Marketing and Communication at the private Abat Oliba University and writes for El Periódico’s ’Gourmets’ food supplement.