With the emotion clearly to be seen in their eyes, Anna Payet and Jordi Roca last month opened Casa Cacao, a new project that brings the brand of El Celler de Can Roca restaurant to Girona’s city centre. It is two dreams in one building: Jordi Roca’s chocolate factory, and the boutique hotel run by Anna Payet. After more than two years of hard work, a great mixture of feelings were released as they finally saw their “dream come true”.

This was the atmosphere of the inauguration of Casa Cacao, especially when Jordi Roca, accompanied by Damian Allsop, the British pastry chef at El celler who rejoined the youngest Roca Brother in his new chocolate adventure, removed the protective paper covering the large windows to reveal what just a few days before had been hiding inside the emblematic former Clínica Esperanza building in Plaça Catalunya, now exquisitely renovated. It was the joy of someone opening a gift, but a shared one, because it was in front of the many passers-by and curious visitors who had waited a long time for this much announced and highly-anticipated moment.

A modest inaugural event, without paraphernalia, preceded the opening of the shop and the chocolate factory located on the side of Ginesta street; the workshop is a visible at street level, allowing curious eyes to see how the cocoa is worked, from bean to bar, and the chocolate is finally made.

The same product, chocolate made with high quality cocoa, is served at the gastrobar in the form of hot and cold drinks and chocolates created by Jordi Roca.

The youngest of the three Roca brothers explains that the idea of the project was born one day when the three brothers set themselves a challenge: “Would we be able to make our own chocolate at our place? And so we made it, at El Celler, and it was good.”

“Damian Allsop had specialised in chocolate, after the first stage with us as pastry chef at El Celler, but neither he nor I had ever made it from scratch. This has been a new challenge for both of us”, declares Roca.

What the two men say motivates them in this adventure is seeing chocolate-making as what they describe as “a perfect circle”, following the philosophy of the bean-to-bar movement: “We bought the cocoa beans directly from growers in small communities from Peru, Venezuela, Colombia and Ecuador,“ says Jordi.

Yet, Casa Cacao does not stop here. On the upper floors of the building, the Hotel Casa Cacao is the realisation of another personal ambition: in this case, of Anna Payet, the wife of chef Joan Roca, who took on the management of the venue. With 20 years experience in the field of tourism on the educational side, she has been involved with the activity of El Celler de Can Roca from the beginning. Payet sees in the hotel the possibility of proving the philosophy of hospitality of the Roca family: “We want to be ambassadors of the city for our customers,“ she says.

Integrated with the workshop, the shop and the chocolate factory, the boutique hotel occupies all four upper floors of the building. It has 15 spacious and comfortable rooms. Both the furniture as well as the textiles are custom and handmade, with great care taken over the smallest details.

The rooftop terrace is a space for the exclusive use of the hotel’s clients, where they can enjoy full breakfasts designed by Joan Roca based on locally-grown products and, of course, chocolate from the ground floor workshop itself. Also from the terrace, the hotel guests can contemplate one of the best panoramic views of the city of Girona.

The interior design project was done by Sandra Tarruella Interioristas, the execution of the work, by Arcadi Pla, and the architectural project was commissioned from the team of Callís Marès Arquitectes. 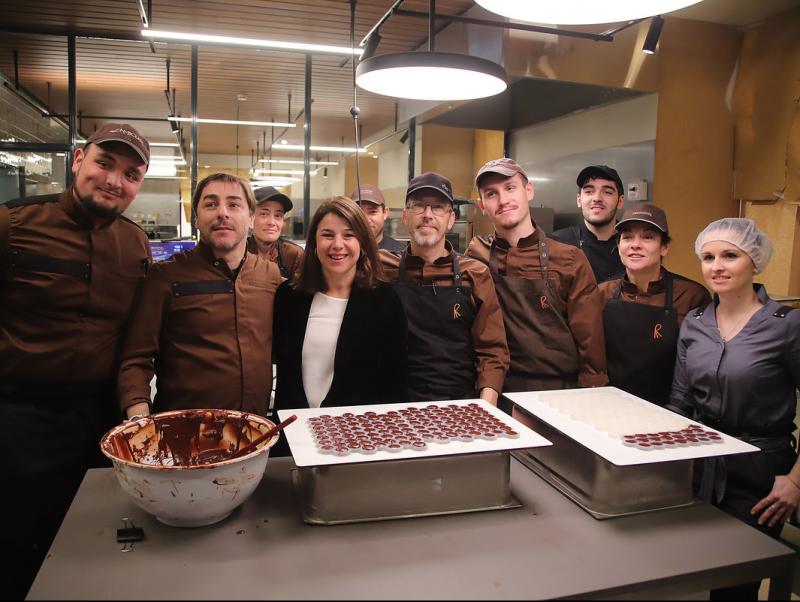 Girona filled with the finest aroma of chocolate