Rosa Maria Martínez Ascaso’s passion for Shakespeare began when she was 14 years old and her father gave her the Catalan version of Love’s Labour’s Lost. Then came Macbeth, Hamlet, King Lear... “The characters in that first work seduced me because they were very alive, they jumped off the page,” she explains. Over the years, she has become such a fan that she has accumulated a library of more than 3,000 titles by (or about) Shakespeare, makes a pilgrimage to Stratford-upon-Avon at least once a year, and collects objects related to the author.

Following on from her two previous works Diàriament, periòdica, sempre Shakespeare (UAB, 1985) and Shakespeare i la natura. Inspiració i simbolisme (Cossetània, 2008), she now presents Sexpeare. Amor i sexe en Shakespeare (Cossetània), with a prologue by Genís Sinca, who highlights the uniqueness of the book’s subject matter, even in the international arena.

Much has been said about Shakespeare’s sexual orientation, and doubts have been expressed about whether he was the author of all the works attributed to him. He was a linguistically ambiguous author... All in all, akin to the sex of angels.

“I set out to compile this book in a very methodical way. I first wrote the architecture of the work, the summary, six chapters and the corresponding sub-sections,” Martínez Ascaso explains, and this can only be done in advance with a thorough understanding of the object of study.

The six chapters, each with around five sub-sections, are: 1. “Facets of love. From science to experience”; 2. “War of the sexes. An unstable alchemy”; 3. “Conflicts of love. Between impulse and the norm”; 4. “Sexpeareland. The universe of a basic instinct”; 5. “Love with humour. Eros’ smile”, and 6.”Sonets and poems. The poetry of the senses”. Then we also have the epilogue, the practical onomastic index and the bibliography.

Once she had designed the structure, Martínez Ascaso began the second phase. “I made a folder for each chapter, a physical one, not on the computer yet. Then, as I re-read Shakespeare’s entire work – you always discover new things, even though you’ve read it so many times – I added a photocopy of every fragment I found that coincided with the theme of the individual folders.”

Her lengthy professional experience as a librarian and documentalist served her well. “I was inspired by the decimal ranking that the American Melvil Dewey created in 1876 and applies to all libraries around the world. Ten sections that encompass all human knowledge.”

It took her about six months to reread the 36 Shakespeare works and six more months to write the final text. From February 2018 to February 2019. “The first idea was to study Shakespeare and love, which, together with death, is the most common theme in his work. Eros and Thanatos. But I realised that there is also a lot of sex... Some explicit, but also camouflaged in words and ambiguity. This is what makes William Empson say that Shakespeare is quantum, because he was ambiguous: an is, is an is not.”

What will the knowledgeable reader of Shakespeare’s work find in this book? “An essay with background and form, very focused on the linguistic game that led Shakespeare to use up to 20,000 different words, when a great author like Dostoyevsky didn’t use more than 9,000. Also, of the words that Shakespeare invented, 2,000 are accepted in current English, 400 years after his death.”

And what might there be for newcomers, what might interest them in the book? “The theme, which is universal; in addition, he touched on all facets of love and sex. And they will be especially attracted by seeing themselves reflected in Shakespeare’s works, whether they are more conservative or progressive. Shakespeare’s theme was man’s struggle with himself. We all have many characters inside that sometimes talk with each other and, moreover, another thing that inspired me for the book, as Sigmund Freud said, love and sex are basic instincts. And everyone will find some interest in an author who could be misogynistic and a pro-feminist at the same time. He was complex and could not be labelled,” Martínez Ascaso summarises. 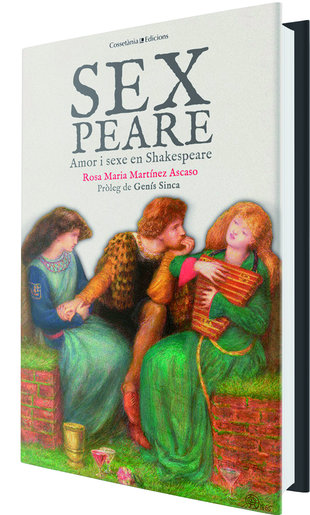