English Hours is at first glance a strange book to translate and publish: not completed, only published many years after the events described and not at all well-known. However, Soldevila’s acute impressions of Britain, comparing it to his Catalan homeland, make the book well worth the effort.

I hadn’t previously come across several of his perceptions. Unlike Catalans, the British associate writers with places, such as Shakespeare’s Stratford, the Lake poets or Walter Scott country, which enhances and guides a way of feeling the landscape. Then, in England cemeteries are not surrounded by high walls: sometimes there are no walls at all and sports might be played on the adjacent field, in full view of the tombs. Several pages explain how the postal service works much better in England and people nearly always answer letters, unlike in Catalonia. And then there are the better-known differences: no-one lit fires in bedrooms, even in winter; and funerals in England take place several days after death and a merry wake follows the ceremony.

Soldevila has power of precision in his careful descriptions. He catches nuances of colour. He sketches several scenes as an Impressionist painter might: a swimming-pool, lights going on in houses at dusk, the outlines of the Welsh mountains, the barber’s, a university debate. Here’s an example:

On the way to Llandudno. Zinc on one side – the sea – sapphire green on the other – fields. Gulls, gulls, gulls everywhere, all the way to infinity.

Beyond Meols, low-lying ground with marshy patches, sad looking meadows and rickety trees which are reminiscent of the wild olive trees in Minorca.

And he travels widely: we see both upper-class Liverpool and its slums from his trips on train and tram. He is impressed by Edinburgh’s clean “noble ashlar masonry”. He visits Warwick and London, Llandudno’s pebbly beach and Southport. There is a rapturous riff on the beauty of Oxford’s colleges.

And he is rapturous about England’s women. They wear shorter skirts than in Spain or France; he admires their walk, their figure and their playing hockey. He ogles the “skimpy bottoms” of their swimsuits. Somewhat tiresome in his repeated comments on women, Soldevila barely mentions his wife. While women’s bodies are over-represented, the diary’s startling omission is the seven-month miners’ lockout, still ravaging the workers of the Lancashire coal-field when he arrives in autumn 1926. Though he ignores the miners, he does not avert his eyes from the poverty he sees in Liverpool and Manchester.

English Hours is not a great book, but it is a good read, stylishly written and giving a sophisticated view of 1920s Liverpool. His outsider’s eyes pick up a lot of detail that a native would miss. And it tells, too, quite a bit about Catalonia and quite a bit more than the writer intended about his own character. 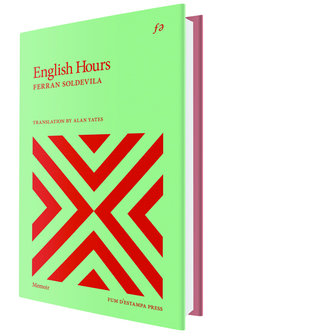 A distinguished historian, Ferran Soldevila (1894-1971) is best known for his three-volume Historia de Cataluña, first published in 1935. An active supporter of Acció catalana, a republican split from Cambó’s conservative Lliga regionalista, he lived in exile in Lausanne (his wife Yvonne was Swiss) for several years after the Civil War defeat. On his return in 1943, he became one of the stubborn “internal resistance” to Franco’s lackeys’ attempts to destroy Catalan culture.

His importance as a historian lies not only in his commitment to reinterpreting Catalonia, but in his ability to reach wide layers of the population in several books, such as Les dones en la nostra història (1963). In the 1950s, he wrote an eight-volume History of Spain that emphasises the multi-national character of the state. Though his history books have often been attacked for romantic nationalism, there is little doubt of his academic rigour, especially seen in books focusing on specific areas, such as his Pere el Gran (1952). As well as the histories and the diary reviewed here, he wrote novels, plays and poetry.

Soldevila worked from 1922 to 1964, with a forced interruption between 1939 and 1954, as a librarian and archivist in the Archive of the Crown of Aragon.